In my obsession with getting faster, I’ve taken a number of tests to assess my athletic potential. In a series of blog posts, I’ll describe these tests and their relative value in “quantifying myself.”

In a few decades’ time, assessing (and even enhancing) an athlete’s genetic potential will be quite straightforward. Genetic testing is already cheaply and readily available to the public via services like 23andme (which I will avail myself of later in this post!). The second half of the puzzle is determining key genotypes and phenotypes that determine athletic performance. Plenty of research on this has already been conducted and even commercialized.

In the meantime, we can examine certain physiological markers like VO2 max that have long been correlated with athletic potential. These markers are, of course, downstream of the genotypes and phenotypes I just mentioned. In other words, we know why higher VO2 max correlates with increased endurance, but we don’t fully know why certain individuals have higher VO2 max to begin with.

As for why higher VO2 max correlates with increased endurance, Michael Hutchinson in Faster provides an easy-to-understand explanation:

The big-ticket number in these things is VO2 max – a concept that has entered common parlance among those bike riders who tend even slightly towards the more geeky. It’s simply the maximum amount of oxygen you can use in a minute. You find it by means of a torture that consists of riding a stationary bike at a pace that increases relentlessly until eventually your body screams that it can pedal no more and you collapse over the handlebars. While you’re riding, a physiologist measures how much oxygen you’re using via a mask and an expensive machine. The biggest number that flits across the screen is your VO2 max. You can keep going, and ride faster than VO2 max pace – albeit not for all that long – but you won’t be able to use any more oxygen to do so. It’s your maximum aerobic capacity, or the size of your aerobic motor, in millilitres of oxygen per minute per kilo of body weight. Think of it like the cubic capacity of a car engine. An average untrained man of my age would have a VO2 max of around 40ml/m/kg. Training effects vary by individual, but an average for a decent club athlete would be something like 60.

VO2 max represents a kind of ceiling for your endurance, albeit one that can be raised to some extent with structured training. Naturally, then, I wanted to find a physiologist with a mask and an expensive machine. 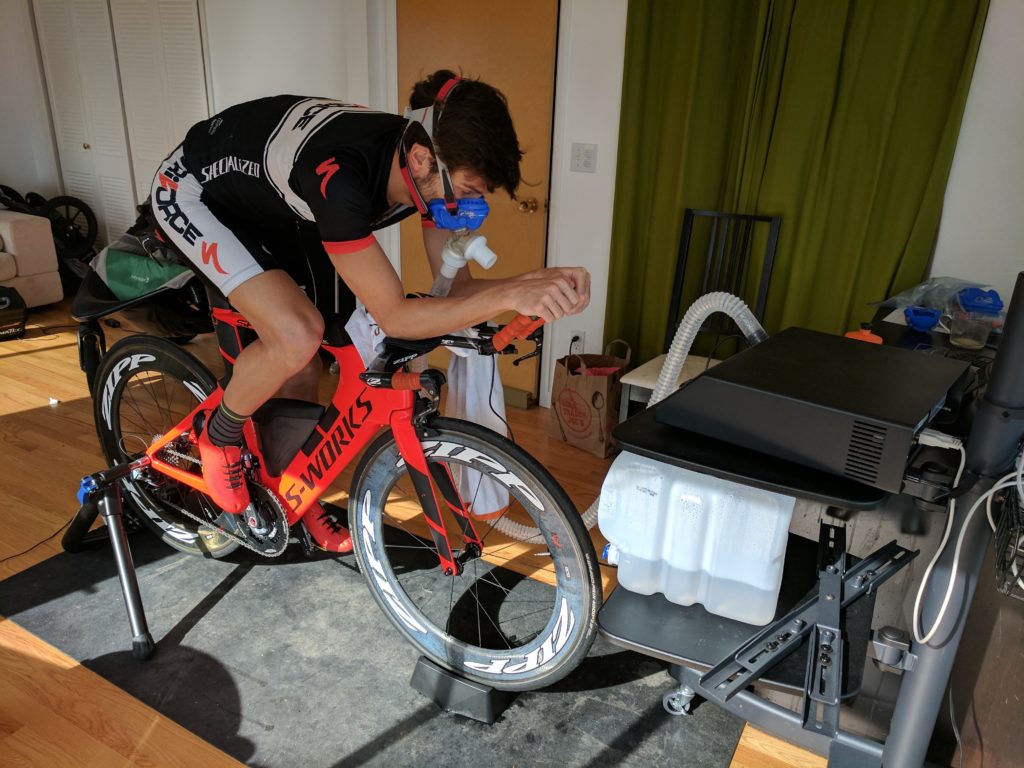 Lucky for me one of my teammates has that expensive machine!

For this test, we ramped from about 190 Watts (still aerobic) to 280 Watts over 20 minutes. I weigh around 65 kg. As you can see from the graph below, I peaked (or rather plateaued) at about 60 mL/kg/min, just as Hutchinson predicted for a “decent club athlete.” The technical definition for VO2 max is when VO2 plateaus during a ramp test. Sometimes a secondary end criterion of 1.15 RER (respiratory exchange ratio) is used. As Hutchinson explained, you can continue increasing your pace or power after this point, but you won’t be using any more oxygen in doing so.

In any case, a VO2 max of 60 mL/kg/min is nothing to brag about. The highest VO2 max values (by body weight) are generally seen among cyclists and cross-country skiers. Of course, some percentage of that is undoubtedly due to doping.

Measurements of VO2 max can also vary slightly depending on the sport. I’ve had a previous VO2 max measurement of around 69 mL/kg/min while running, but it’s hard to say how accurate that test was since I’m missing some of the raw data (e.g. RER) from it.

As for guessing at genetic markers for VO2 max, the Gly482Ser (rs8192678) SNP (single-nucleotide polymorphism) of the PPARGC1A gene is a good starting point. Some studies have found a negative correlation between VO2 max and the frequency of the Ser482 allele. In other words, if you do not have the A (or its complement T) allele at this locus, you are more likely to have an “exceptional” VO2 max. Thankfully, 23andme allows me to search my raw genome for this allele so that I can rest easier at night knowing I have C/C!

At this point, it’s worth noting that this information isn’t really actionable. The range of your VO2 max is likely determined by genes such as PPARGC1A that you can’t change (yet). You can increase your VO2 max to some extent through training, but your actual performance will be a better indicator than VO2 max of how effective that training was. After all, if you PR, why would you care if your VO2 max didn’t change? On the other hand, if your VO2 max tested as one of the highest ever recorded (say, 90 mL/kg/min or so) and your performances were MOP (middle-of-the-pack), you might realize that you’re not racing to your full potential and you should examine other data from your training to figure out why.

Incidentally, the metabolic testing conducted to measure VO2 max is much more actionable in determining how efficient you are at fat burning and how many calories you need to take in during a half Ironman or Ironman. But those values aren’t as fun to brag about!